A superb start to the 2020 season for Sam Wilford and the IDWe Racing team with back to back races in Portugal being the location for the season openers.

Sam got up to speed quickly in the pre-race testing in Estoril and was getting used to being back on the bike for the first time since early March Qualifying 15th on the grid a little beaten up after a fall the day before.  Race one went to plan with a good start and Sam made his way past a number of riders to end up taking 12th place at the end of the race a personal best in the highly competitive FIM CEV Repsol Moto2 Championship.  Race 2 saw another excellent start and Sam raced hard to match his personal best and come away from the opening round of the 2020 season with two 12th place finishes.

After only, a couple of days rest the team were back in action in free practice at the Portimao Autodrom Algarve in temperatures well into the 30s the team struggle to find a good setting in the stages but by qualifying they had made the right changes to give Sam what was needed to qualify in 15th place again. Race 1 saw a great race with Sam working his way through the pack to get to onto the back of the group of factory teams and crossed the line in his best finishing place of 10th the team were ecstatic with the performance but they could not celebrate too much as there was still work to do only a few hours later for race 2. The second race arguably saw better riding from Sam than in all the previous races in Portimao and Estoril, after breaking the tow from the pursuing group Sam was on his own chasing down the lead of the riders ahead and showed great pace in the closing stages of the race circulating faster than all the riders around him to end up 11th. All in all a great start to the season with 2 solid rounds and a good points tally putting Sam and the IDWe Racing team 13th in the Championship standings.

If you would like to know more about opportunities of getting involved with Sam Wilford and IDWe Racing email us on racing@idwe.co.uk 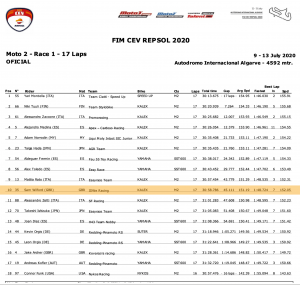 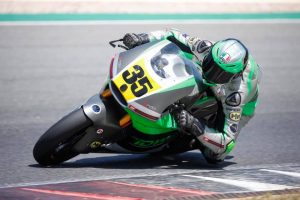